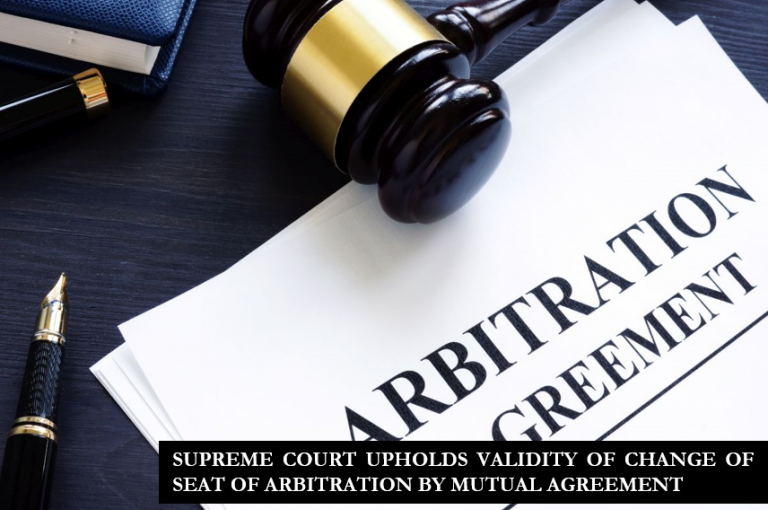 The Two Judge Bench of the Hon’ble #SupremeCourt of India comprising of Justices Rohinton Fali Nariman and Hrishikesh Roy passed a Judgment dated 13-04-2021 in the case of <strong><em>M/S Inox Renewables Ltd. v. Jayesh Electricals Ltd. Civil Appeal No. 1556 Of 2021 (Arising out of SLP (C) No.29161 of 2019) </em></strong>and held that if the parties to #arbitration mutually decide upon changing the ‘Venue of Arbitration’, then the changed venue becomes the ‘Seat of Arbitration’.

In the present case, M/s Gujarat Fluorochemicals Ltd. <strong>(GFL) </strong>and Jayesh Electricals Ltd. <strong>(Respondent) </strong>entered into a Purchase Order dated 28-01-2012 <strong>(Contract)</strong>, for the manufacture and supply of power transformers at wind farms. On 30-03-2012, a Business Transfer Agreement <strong>(Agreement)</strong> was entered into between M/S Inox Renewables Ltd. <strong>(Appellant) </strong>and GFL by virtue of which a slump sale of the entire business of GFL took place in favour of the Appellant. Clause 8.5 of the Contract provided for the Arbitration Clause. Clause 9.11 and 9.12 of the Agreement designated Vadodara as the Seat of the Arbitration between the parties, vesting the Courts at Vadodara with exclusive jurisdiction qua disputes arising out of the Agreement.

On 05-09-2014, an Application was filed by the Respondent under Section 11 of the Arbitration and Conciliation Act, 1996 <strong>(the Act) </strong>to appoint an Arbitrator under the Contract. The High Court of Gujarat at Ahmedabad <strong>(High Court) </strong>passed an Order and referred the Parties to the dispute for Arbitration by a sole Arbitrator and appointed Shri C.K. Buch as the sole Arbitrator to resolve the disputes between the parties arising out of the Contract.

Subsequently, while making a reference to the Agreement, the Appellant filed a Petition in the Commercial Court at Ahmedabad under Section 34 of the Act, whereby, the Ahmedabad Court passed an Order dated 25-04-2019 and while referring to Clauses 9.11 and 9.12 of the Agreement, the Court held that the Courts at Vadodara alone would have exclusive jurisdiction, as the Ahmedabad Courts are not vested with such jurisdiction.

Aggrieved by the said Order dated 25-04-2019 of the Commercial Court at Ahmedabad, the Appellant filed a Special Civil Application No. 9536 of 2019 before the High Court of Gujarat.

The High Court of Gujarat vide Judgment dated 09-10-2019, dismissed the said Application, and while making a reference to the Arbitration Clause in the Contract as well as the term “exclusive jurisdiction clause” observed as follows that as per the terms of the Purchase Order, the courts of Jaipur would have exclusive jurisdiction, where the Section 34 Petition should be filed:

<strong><em>“even assuming that Ahmedabad would have jurisdiction, if one is to go by clause 8.5 of the purchase order, exclusive jurisdiction being vested in the courts at Rajasthan, the appropriate court would be the court at Jaipur. However, despite this finding, it found no error in the Ahmedabad Court’s decision dated 25th April, 2019.”</em></strong>

Aggrieved, the Appellant filed an Appeal in the Hon’ble Supreme Court of India impugning the Judgment dated 09-10-2019. Taking into consideration, the arguments advanced by the Parties to the dispute, the Apex Court noted that the Arbitrator had recorded the consent of both the Parties to change the venue of Arbitration to Ahmedabad, and the same was not disputed by the Parties.

<strong><em>“the parties may mutually arrive at a seat of arbitration and may change the seat of arbitration by mutual agreement which is recorded by the arbitrator in his award to which no challenge is made by either party.”</em></strong> the Court observed.

Further, while placing reliance on the case of <strong><em>BSG SGS SOMA JV v. NHPC Limited, (2020) 4 SCC 234</em></strong>, the Supreme Court held that the Courts at Ahmedabad acquired exclusive jurisdiction as the seat of the Arbitration, when Ahmedabad was chosen as the venue of Arbitration.

<strong><em>“…it is clear that the parties have, by mutual agreement, entered into an agreement to substitute the venue at Jaipur with Ahmedabad as the place/seat of arbitration under Section 20(1) of the Arbitration and Conciliation Act, 1996.”</em></strong>

Thus, the Hon’ble Supreme Court while allowing the Appeal held that Ahmedabad Court had jurisdiction to deal with the Petition filed by the Appellant under Section 34 of the Act.