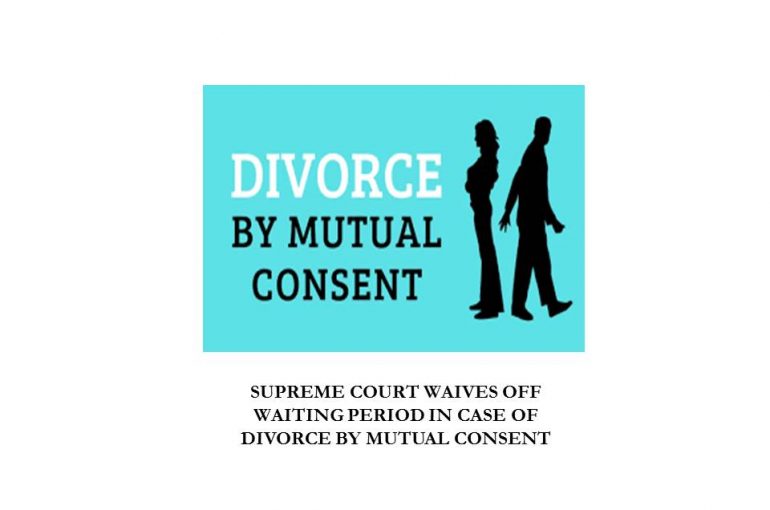 A Division Bench of the Hon’ble #SupremeCourt of India comprising of Justices Indira Banerjee and J. K. Maheshwari passed a Judgment dated 11-12-2021 in the case of Amit Kumar vs Suman Beniwal {Civil Appeal No.  7650 of 2021} and held that the #statutory #waiting period of #sixmonths under Section 13(B) (2) of the #HinduMarriage Act, 1955 (Act) can be #waived off on account of #irreconcilable #differences between the parties to the #marriage.

In the instant case, the Appellant and the Respondent (hereinafter Parties) were married according to Hindu rites on 10-09-2020. Precisely, three days after the marriage i.e. on 13-09-2020, the Parties separated because of irreconcilable differences. After over one year of separation, i.e. around 30-09-2021, a Petition was filed by the Parties under Section 13B of the Act seeking a decree of divorce by mutual consent. Around 12-10-2021, the Parties moved an Application before the Family Court, Hissar seeking waiver of the six-month waiting period under Section 13B(2) of the Act, to make the motion for the Court to pass a decree of divorce.

For easy reference, Section 13B of the Act is reproduced as follows:

Section 13B Divorce by mutual consent 

(1) Subject to the provisions of this Act a petition for dissolution of marriage by a decree of divorce may be presented to the district court by both the parties to a marriage together, whether such marriage was solemnised before or after the commencement of the Marriage Laws (Amendment) Act, 1976, on the ground that they have been living separately for a period of one year or more, that they have not been able to live together and that they have mutually agreed that the marriage should be dissolved.

(2) On the motion of both the parties made not earlier than six months after the date of the presentation of the petition referred to in sub-section (1) and not later than eighteen months after the said date, if the petition is not withdrawn in the meantime, the court shall, on being satisfied, after hearing the parties and after making such inquiry as it thinks fit, that a marriage has been solemnised and that the averments in the petition are true, pass a decree of divorce declaring the marriage to be dissolved with effect from the date of the decree.

Aggrieved, the Appellant approached the Hon’ble Supreme Court of India. After taking into consideration, the facts of the case and the arguments advanced by the Parties to the dispute, the Apex Court observed that “Section 13B (1) of the Act read with Section 13B(2) envisages a total waiting period of 1 ½ years from the date of separation to move the motion for a decree of divorce.  The High Court correctly found that Section 13B (2) is directory, but rejected the Revisional Application with the observation that the Family Court had no option but to dismiss the application for waiving the waiting period of six months, since the condition of waiting for 1½ years from the date of separation for moving the motion for passing of a decree of divorce had not been fulfilled.”

Further, the Bench observed that the Legislature has enacted Section 13 B(2) of the Act to provide a cooling period of six months from the date of filing of the Divorce Petition under Section 13B (1), in case the Parties change their mind and resolve their differences. On the expiry of the said period of six months, if the Parties still wish to go ahead with the divorce, and make a motion, the Court has to grant a decree of divorce declaring the marriage dissolved with effect from the date of the decree, after making such enquiries as it considers fit.

The objective of Section 13B (2) read with Section 14 is to save the institution of marriage, by preventing hasty dissolution of marriage. While placing reliance on the case of Amardeep Singh   v.  Harveen  Kaur (2017) 8 SCC 746 the Apex Court reiterated that when a case is made out to waive the statutory period under Section 13­B (2), it can do so after considering the following:

i) “The statutory period of six months specified in Section 13­ B(2), in addition   to   the   statutory   period   of   one   year   under Section 13­B(1) of separation of parties is already over before the first motion itself;

iii) The   parties   have   genuinely   settled   their   differences including alimony, custody of child or any other pending issues between the parties;

iv) The waiting period will only prolong their agony.”

On a perusal of the facts of the present case, it was clear that both the Parties were well educated and highly placed Government Officers. They have been married   for   about   15   months.   However, even after 14 months of separation, the Parties still wanted to go ahead with the divorce. Hence the Supreme Court concluded that there has been an irretrievable breakdown of marriage and the Parties are not willing to live together as husband and wife.

Thus, the Hon’ble Supreme Court while allowing the Appeal set aside the Impugned Order dated 17-11-2021. In exercise of the powers under Article 142 of the Constitution of India, the Apex Court granted the Appellant and the Respondent a Decree of Divorce by Mutual Consent under Section 13B of the Act, thereby, waiving the statutory waiting period of six months under Section 13(B) (2) of the Act.