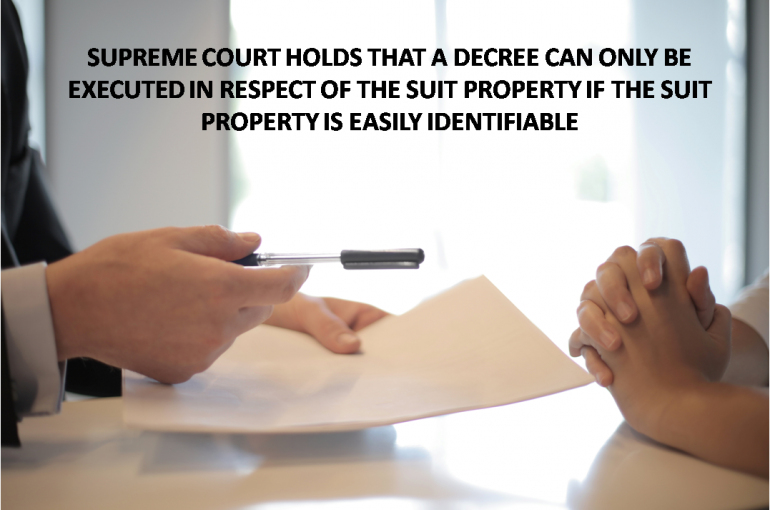 A single Judge Bench of the Supreme Court presided by Justice Indira Banerjee allowed the Execution First Appeals vide Judgment dated 22.09.2022  in the case of Hindustan Petroleum Corporation Limited vs Ajay Bhatia arising out of S.L.P. (C) NO. 20718 OF 2021 and S.L.P. (C) NO. 20737 OF 2021 and held that Decree can only be executed in respect of the Suit Property if it is easily identifiable.

The Appellant, Hindustan Petroleum Corporation Limited (HPCL), operated two separate retail outlets/petrol pumps namely M/s Azadpur Service Station and M/s Tej Service Station, through two different dealers, at 4/4 Azadpur, G.T. Road, Delhi and at 4/5, Azadpur, G.T. Road, Delhi respectively. The owners of Plot No.4/4 and 4/5 gave it on Lease on 15.10.1970 to M/s CALTEX India Ltd. which had merged into HPCL and M/s ESSO Standard Eastern Inc respectively. The Property situated at Plot no. 4/4 was mutated in the name of one, Mr. Ajay Bhatia, the Respondent who had bequeathed the said Property on the basis of the owner’s Will on 18.09.2001 and certain part of Plot no.4/5 was bequeathed in the name of Respondent’s legal representatives.

A Suit was filed before the Trial Court holding no. C.S.(OS) No.1828/2006 only in respect of Plot No.4/4 for recovery of possession on the grounds that the Lease Deed expired in June, 2003 and there was no automatic renewal. The prayer also included the recovery of damages and mesne profits. The Trial Court granted the Respondent mesne profit at the rate of Rs.50,000/- per month with effect from July 2003 till vacation of the Suit Property. However, on further Appeal to the Delhi High Court, the mesne profit was allowed only from the time of termination of the Lease Deed via Notice on 28.02.2006 and not from 2003.

The Delhi High Court in its Order dated 24.11.2021 also refused execution with respect to Plot No. 4/5.  Therefore SLP was filed before the Supreme Court.

Mr.Vishwanathan, Learned Counsel appearing on behalf of the Appellant submitted that the Suit was decreed in terms of prayer of the Plaint specifically referred to Property situated at 4/4 and the Executing Court was required to ascertain the exact description of the Decretal Property and appoint a local commissioner. He further contended that the Respondent is wrongfully claiming possession of Plot No.4/5 of which he was not even owner.

Mr. Kalra on behalf of the Respondents submitted that the decree of possession obtained by the Respondent had assumed finality and further contended that 4/4 and 4/5 are only landmarks as found by the Courts below and no substantial question of law is involved.

The Supreme Court reiterated from the Plaint that that there were two plots of land, Plot No. 4/4 being the Suit Property which was inherited by the Respondent and Plot No. 4/5, an adjacent Plot, which fell in the share of other legal representatives and added that it is absolutely clear that the Suit was filed only in respect of Plot No.4/4.

The Supreme Court held that the Suit Property did not include Plot No. 4/5 and the owners of Plot No. 4/5 had not even joined as Plaintiffs in the said Suit. It also added that there are no findings by any Court that 4/4 or 4/5 are only landmarks. Rather, there is a plethora of documents on record to show that two separate petrol pumps/retail outlets were being run on two contiguous plots

The Apex Court affirmed that it is clear that the decree is not executable against Plot No. 4/5. The Respondent is liable to restore the possession of Plot No.4/5 to the Appellant. The Executing Court would have to appoint a Local Commissioner to demarcate and hand over Plot No.4/4 to the Respondent. It further added that Order 7 Rule 3 of the Code of Civil Procedure mandates that where the subject matter of the suit is immovable property, the plaint shall contain a description of the property sufficient to identify it, and in case such property can be identified by boundaries or numbers in a record of 18 settlement or survey, the plaint shall specify such boundaries or numbers.

In Pratibha Singh vs Shanti devi Prasad (2003) 2 SCC 330, this Court held that “when a suit for immovable property had been decreed but the property not definitely identified, the defect in the Court record caused by overlooking of provisions contained in Order 7 Rule 3 and Order 20 Rule 3 could be cured. The Court which passed the decree could supply the omission”.

Thus, based on the aforesaid grounds, the Supreme Court allowed the Appeals and the Impugned Judgment and Order dated 24.11.2021 of the Delhi High Court was set aside. The Executing Court was therefore directed to decide the Execution Applications and to appoint a Revenue Officer as Local Commissioner to demarcate Plot No. 4/4.