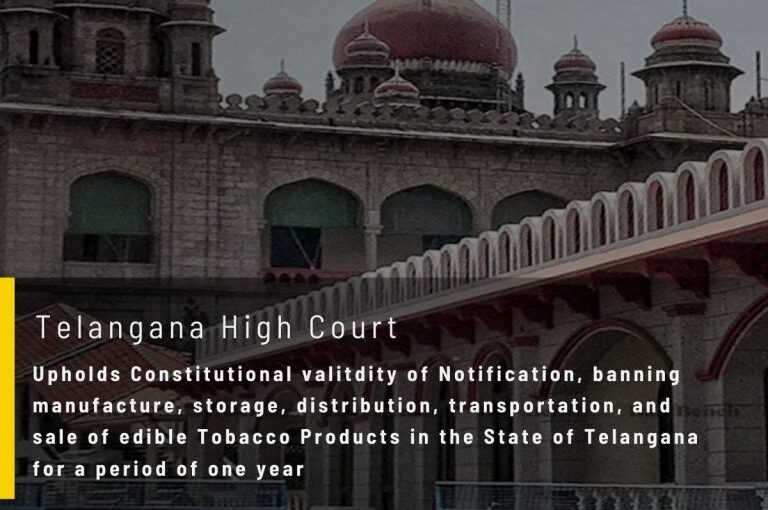 A Two Judge Bench of the #TelanganaHighCourt comprising of Chief Justice Satish Chandra Sharma and Justice A.Rajasheker Reddy passed a Common Order dated 30-11-2021 in a Batch of 128 Writ Petitions inter alia WP. Nos. 19928, 20022, 21277 of 2021 and others, wherein the High Court decided upon the issue, whether the #Notification issued under the #FoodSafetyandStandardsAct, 2006 (FSS Act) for #banning the #manufacture and #sale of #edible #tobacco related products in the State of #Telangana, violates the provisions of Cigarettes and Other Tobacco Products (Prohibition of Advertisement and Regulation of Trade and Commerce, Production, Supply and Distribution) Act, 2003 (COTP Act) and further, violates the Petitioners’ #FundamentalRight to Carry Out Trade and Business under Article 19(1)(g) of the Constitution of India and is against #publicsafety.

In this case, the Petitioners are engaged in the business of wholesale distribution and retailing of chewing/chewable tobacco products and cigarettes, pan masala mixed with tobacco and other allied products (Products). However, the Commissioner of Food Safety, Telangana, i.e. the Respondent No. 3 issued a Notification No.505/FSS-1/2021, dated 06-01-2021 (Notification) in exercise of powers conferred under Section 30 of the FSS Act, thereby, banning manufacture, storage, distribution, transportation and sale of edible Tobacco Products such as Gutka/Pan Masala containing Tobacco and Nicotine, and Chewing Tobacco Products in the State of Telangana for a period of one year with effect from 10-01-2021, i.e. till 10-01-2022. The relevant extract from the Notification is reproduced below for easy reference:

Notification No. 505/FSS-1/2021: In exercise of the powers conferred under Clause (a) of Sub-Section 2 of Section 30 of Food Safety and Standards Act, 2006 read with 2.3.4 of Food Safety and Standards (Prohibition and Restriction on Sales) Regulation 2011 and in the interest of public health, the Commissioner of Food Safety, Telangana State hereby prohibits the Manufacture, Storage, Distribution, Transportation and Sale of Gutka/Pan Masala which contains Tobacco and Nicotine, as ingredients and Chewing Tobacco Products like Chap Tobacco, Pure Tobacco, Khaini, Kharra, Scented Tobacco/Flavoured Tobacco packed in pouches/sachets/containers etc., or by whatever name it is called in the entire State of Telangana for a period of one year with effect from 10th January, 2021.

The said Notification has been issued by the Commissioner of Food Safety, Telangana in public interest, as various Scientific Reports / Opinions of the Indian Council of Medical Research (ICMR) and National Institute of Health and Family Welfare (NIHFW) suggested that there are extremely harmful effects of consumption of Gutka / Pan Masala, Chewing Tobacco such as Oesophageal Cancer, Stomach Cancer, etc.

Aggrieved, the Petitioners filed a Batch of Writ Petitions before the Telangana High Court, thereby, challenging the Notification on the ground that it is illegal, arbitrary, unconstitutional, and ultra vires the COTP Act and further, violates the principles of natural justice and Articles 19(1)(g) of the Constitution of India.

The Hon’ble High Court passed a Common Order dated 30-11-2021 and made the following observations in this case:

1) That Section 3 (j) of FSS Act gives a wide and exhaustive definition of “Food” and includes any substance, that is processed, partially processed or unprocessed and which is intended for human consumption. The High Court referring to various Supreme Court Judgments held that products such as smokeless tobacco, gutka, pan masala, kharra, khaini or any other similar products like chewing tobacco/flavoured tobacco are used commonly for human consumption or in preparation of human food, hence, such products are classified as “Food” under the FSS Act. The relevant provision is reproduced below for easy reference:

Food means any substance, whether processed, partially processed or unprocessed, which is intended for human consumption and includes primary food to the extent defined in clause (zk), genetically modified or engineered food or food containing such ingredients, infant food, packaged drinking water, alcoholic drink, chewing gum, and any substance, including water used into the food during its manufacture, preparation or treatment but does not include any animal feed, live animals unless they are prepared or processed for placing on the market for human consumption, plants, prior to harvesting, drugs and medicinal products, cosmetics, narcotic or psychotropic substances:

Provided that the Central Government may declare, by notification in the Official Gazette, any other article as food for the purposes of this Act having regards to its use, nature, substance or quality;

2) That the Supreme Court has in an earlier matter of Ankur Gutkha vs Indian Asthama Care Society & Ors. S.L.P. No.16308 of 2007, passed an Order dated 03-04-2013 and directed the Secretaries, Health Department of all States/Union Territories to report compliance of complete ban in respect of manufacturing and sale of gutka and pan masala with tobacco and/or nicotine.

3) That the COTP Act has been enacted in 2003 with an aim and object to prohibit the advertisement of, and to regulate trade and commerce, sale, distribution and storage, etc of cigarettes and other tobacco products with an aim to discourage the use or consumption of tobacco. Whereas, the FSS Act has been enacted in 2006 with an object to ensure safe and wholesome food for the people. Further, the COPT Act does not deal with the long-term effects of smoking and consumption of tobacco and other products on the health of citizens. Whereas, the FSS Act is a more comprehensive law, dealing with the larger issue of Safety and Standards of Food in India.

4) Hence, as the FSS Act 2006 has been enacted later to the COTP Act 2003 and FSS Act is much more comprehensive in nature, so, FSS Act being a later and comprehensive enactment would prevail over COTP Act.

5) Further, as per Section 89 of the FSS Act, the FSS Act would prevail over all food related laws. The relevant provision is reproduced below for easy reference:

Section 89 of FSS Act: Overriding effect of this Act over all other food related laws.–

The provisions of this Act shall have effect notwithstanding anything inconsistent therewith contained in any other law for the time being in force or in any instrument having effect by virtue of any law other than this Act.

6) Thus, as tobacco and other products, fall within the definition of “Food” under Section 3 (j) of the FSS Act, the FSS Act would have overriding effect over the COPT Act.

Therefore, based on the aforesaid grounds and considering the high death rate on account of gutka/pan masala and other tobacco products that cause diseases like cancer, etc, the High Court held that the restriction imposed by the Notification is in larger public interest and is a reasonable restriction and does not in any manner offend the right to carry on trade guaranteed under Article 19(1)(g) of the Constitution. Hence, the High Court upheld the Constitutional validity of the Notification and thereby, dismissed the Batch of Writ Petitions.

The Notification has brought within its ambit several manufacturers and traders of edible Tobacco Products of which around 128 persons have filed Writ Petitions challenging the Notification dated 06-01-2021. Upholding the ban imposed by the Commissioner of Food Safety, Telangana has affected the livelihoods of several persons. Though the Notification is for a period of one year, ending on 10-01-2022, it is likely after the Telangana High Court’s Verdict that the same will be extended. Possibly the only hope for the affected Parties lies in approaching the Supreme Court of India on several grounds inter alia the fact that the livelihood of hundreds of people will be affected. In these difficult times, the Supreme Court ought to pass an order that will balance the equities along with public interest.