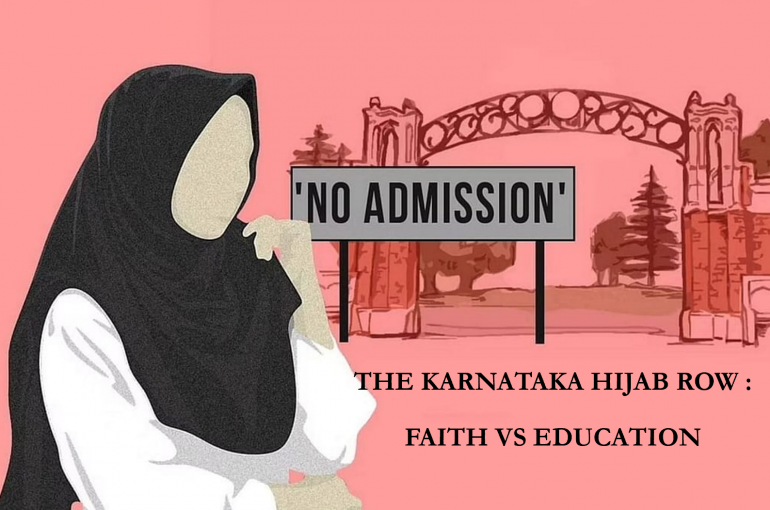 The entire controversy in the Karnataka Hijab Row began in January 2022, when six Female Muslim Students of a Government Pre-University College (equivalent to a high school) in the Udipi District of State of Karnataka alleged that they were not allowed to attend classes on the sole ground of wearing a Hijab or a headscarf. Thereafter, few other Colleges in Karnataka banned the entry of Female Muslim Students wearing Hijab inside classrooms. As a result, this led to protests by the Muslim Students against ban of entry on religious grounds. Gradually, clashes escalated between Muslim and non-Muslim Students, where the Muslim Students were reportedly of the opinion that they should not be forced to choose between faith and education, whereas, the non-Muslim groups opined that schools and colleges are not meant to be a place to display religion or faith and further, hailed that if students wearing Hijab are allowed to attend classes, then they would also attend classes wearing saffron and other such symbolic clothes.

Meanwhile, the State Government issued an Order dated 05-02-2022 (Impugned Government Order) under Section 7 of the Karnataka Education Act, 1983 (1983 Act) (Government to prescribe curricula, etc)  and Section 133 of the 1983 Act (Powers of Government to give directions), directing the College Development Committees all over the State to prescribe ‘Student Uniform’, in terms of Rule 11 of Karnataka Educational Institutions (Classification, Regulation & Prescription of Curricula, etc) Rules, 1995 (1995 Rules), which provides that the recognised educational institutions in the State may prescribe their own set of student uniforms, clothing, etc. Rule 11 of the 1995 Rules is reproduced below for easy reference:

(1) Every recognised educational institution may specify its own set of Uniform. Such uniform once specified shall not be changed within the period of next five years.

(2) When an educational institution intends to change the uniform as specified in sub-rule (1) above, it shall issue notice to parents in this regard at least one year in advance.

Aggrieved by the Impugned Government Order and the decision of the Colleges to ban the entry of Female Muslim Students wearing Hijab inside classrooms, these Students filed Writ Petitions before the Karnataka High Court in Smt. Resham and Another vs State of Karnataka and Others WP 2347/2022 and other connected Writ Petitions on 31-01-2022, against the State of Karnataka, the Government PU College, Udipi, the District Commissioner, Udipi and the Director of Karnataka Pre-University Board, Department of Pre-University Education, Karnataka.

The Single Judge in these matters, referred the cases to a Larger Bench vide Order dated 09-02-2022 on the ground that these cases involved questions of enormous public importance.

Accordingly, a Special Three Judge Bench of the High Court was constituted immediately, comprising of Chief Justice of the High Court, J. Krishna S Dixit and J. M. Khazi and the hearing commenced from 10-02-2022. The Special Bench passed various Orders in this case and made the following observations:

2) That the Petitioners further contended that dress and attire are a part of the Fundamental Right to Speech and Expression and the Right to wear Hijab is a matter of Privacy and hence, the Institutions do not have the authority to compel them to remove Hijab to attend classes and the State Government has no authority to pass the Impugned Government Order, mandating College Development Committees to prescribe student uniforms.

3) That the Respondents contended that the Impugned Order per se does not prescribe any uniform or dress code. Further, there are other counter agitations by students who want to gain entry to the Institutions with saffron and blue shawls and other such symbolic clothes and religious flags, etc. Hence, the Government passed Prohibitory Orders to curb the situation.

(1) Subject to public order, morality and health and to the other provisions of this Part, all persons are equally entitled to freedom of conscience and the right freely to profess, practise and propagate religion.

(a) regulating or restricting any economic, financial, political or other secular activity which may be associated with religious practice;

(b) providing for social welfare and reform or the throwing open of Hindu religious institutions of a public character to all classes and sections of Hindus.

Explanation I.—The wearing and carrying of kirpans shall be deemed to be included in the profession of the Sikh religion.

5) Thus, the Special Bench observed that in this case, the main issue that needs to be carefully examined is that “Whether wearing of Hijab in the classroom is a part of essential religious practice of Islam in the light of Constitutional Guarantees”.

i) The High Court directed the State Governments and other Stakeholders to reopen the Educational Institutions and allow the students to return to their respective classes at the earliest.

ii) The High Court further held that until further orders are passed in these Writ Petitions, all the students, regardless of their religion or faith, are restrained from wearing saffron shawls, scarfs, Hijab, religious flags, etc within the classroom.

iii) The Bench further clarified that this Order is applicable only to such Institutions wherein the College Development Committees have prescribed the student dress code/uniform.

The High Court in this matter is hearing the case on a regular basis and further arguments have taken place subsequently, but final order and judgment is yet to be passed. This matter is next posted for hearing on 21-02-2022.

Meanwhile, the Petitioners have reportedly filed an Appeal before the Supreme Court against the Interim Order dated 10-02-2022 of the High Court in the matter of Dr J Halli Federation of Masajids Madaaris and Wakf Institutions v. State of Karnataka. But the Apex Court is yet to hear the same.

Hereafter, updates and High Court Order in the Karnataka Hijab Row would be posted, as and when there are significant developments in the aforesaid matters.

While the Right to Religion is available to every Indian Citizen, one should not overlook the fact that restrictions can be imposed on this Right in the public interest. Possibly, the institutions that restricted the use of Hijab were trying to restrict the display of religious sentiments in an educational institute to avoid groupism created by religion. Hence, it is not as if they have singled out the Muslim Tradition, but provided a general regulation regarding display of religious sentiments in the outward appearance. There are some countries that have restricted the use of Hijab, Burkha, Pagdi, etc and the religious sects that have been affected by this, have learnt to accept it. Possibly, it is not about hurting religious sentiments but trying to show a progressive mindset in restricting the use of Hijab in the educational institute. The Courts are certainly left with a difficult choice between what can be deemed to be a right, a sentiment and a restrictive practice. One can only wait and watch.