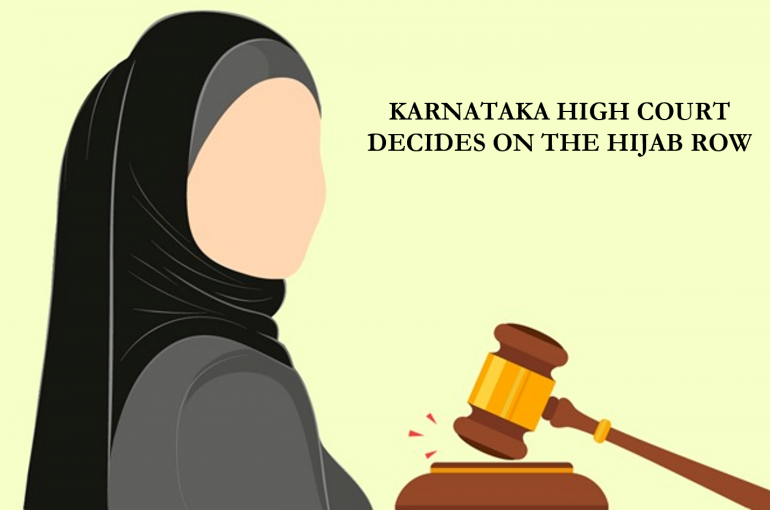 The Hon’ble Karnataka High Court has in a recent case of Smt. Resham and Another vs State of Karnataka and Others WP 2347/2022 and other connected Writ Petitions passed a Judgment dated 15-03-2022 in the Karnataka Hijab Row.

The cause of the Hijab Row and the contentions of the Muslim students and the stand of the State Government have been discussed in detail at the link given below:

In this case, some Female Muslim Students had approached the High Court in the aforesaid Writ Petition and challenged an Order dated 05-02-2022 (Impugned Government Order) issued by the Karnataka State Government that allowed College Development Committees all over the State to prescribe ‘Student Uniform’, in terms of Rule 11 of Karnataka Educational Institutions (Classification, Regulation & Prescription of Curricula, etc) Rules, 1995 (1995 Rules). Accordingly, the Government Pre-University College (equivalent to a high school) in the Udipi District of State of Karnataka banned entry of Female Muslim Students wearing Hijab inside classrooms.

1) That Article 25 of the Constitution of India guarantees every person in India freedom of conscience, right to profess, practice and propagate religion. But there is no mention of ‘culture’ in Article 25. The said Article 25 is reproduced below for easy reference:

Article 25 of the Constitution of India: Freedom of conscience and free profession, practice and propagation of religion

(1) Subject to public order, morality and health and to the other provisions of this Part, all persons are equally entitled to freedom of conscience and the right freely to profess, practise and propagate religion.

(a) regulating or restricting any economic, financial, political or other secular activity which may be associated with religious practice;

(b) providing for social welfare and reform or the throwing open of Hindu religious institutions of a public character to all classes and sections of Hindus.

Explanation I.—The wearing and carrying of kirpans shall be deemed to be included in the profession of the Sikh religion.

2) That the expression ‘freedom of conscience’ under Article 25 refers to the mental process of belief or non-belief, while ‘profession’ ‘practice’ and ‘propagation’ refer to external action in pursuance of such mental idea or concept of the person. The external action would necessarily affect other people. Hence, the freedom of conscience or mental belief is subject to State regulations.

3) Whereas, ‘religion’ is a matter of faith of individuals or communities and does not necessarily relate to a belief in the existence of God(s). For instance, well known religions such as Buddhism and Jainism do not believe in God. Religion may also lay down a code of ethical rules for its followers to abide and accept the same, and prescribe rituals, ceremonies, modes of worship, etc which are the integral parts of religion, and these forms may even extend to matters of food and dress.

4) But the free exercise of religion under Article 25 is subject to reasonable restrictions imposed by the State on the grounds of public order, morality and health. Article 25 (2) (a) and (b) empower the State to regulate economic, financial, political and secular activities which may be associated with religion and enact laws, etc for social welfare and reform. Such laws may cause interference with religious beliefs and practice even though such beliefs and practices are considered to be essential or vital by those professing the religion.

5) That in order to determine whether hijab is a part of essential religious practice, it is necessary to ascertain what is ‘essential religious practice’ in India. As per Dr. BR Ambedkar, the Draftsman of the Constitution, essential practice means those practices that are fundamental to follow a religious belief… Test to determine whether a part or practice is essential to a religion is to find out whether the nature of the religion will be changed without that part or practice. If the taking away of that part or practice could result in a fundamental change in the character of that religion or in its belief, then such part could be treated as an essential or integral part. There cannot be additions or subtractions to such part because it is the very essence of that religion and alterations will change its fundamental character.

7) That in one of the interpretations of the Holy Quran in a book written by Mr. Abdullah Yusuf Ali, he has quoted that there should be no compulsions in religion, as compulsion is incompatible with religion. That is because religion depends upon faith and will and the same would be meaningless if it is induced by force.

8) That he further wrote that Hijab is a veil ordinarily worn by Muslim women, which literally means partition or screen or curtain. Although the Holy Quran states that women should draw veils and not display their beauty, ornaments and outer garments to public except their husbands, family members, etc, however, this rule is not absolute in case for any reason, it cannot be observed. Further, the term ‘Hijab’ or ‘Purdah’ has not been used in the Holy Quran.

9) Hence, wearing of screen or veil has been made only recommendatory in the Holy Quran as a measure of social security and there is no mandate as such to wear a Hijab or headscarf or headgear for Muslim women. Further, there is no penalty or penance prescribed for not wearing Hijab in the Holy Quran.

11) Therefore, what is not religiously made obligatory cannot be made an essential aspect of religion by resorting to public agitations, etc.

12) Further, the State is empowered under Article 25 to impose reasonable restrictions on the free exercise of religion on the grounds of public order, morality and health. Also, Section 7 of the Karnataka Education Act, 1983 (1983 Act) (Government to prescribe curricula, etc) and Section 133 of the 1983 Act (Powers of Government to give directions), empowers the State Government to issue directions to the educational institutions all over the State to prescribe ‘Student Uniform’, in terms of Rule 11 of Karnataka Educational Institutions (Classification, Regulation & Prescription of Curricula, etc) Rules, 1995 (1995 Rules).

13) That the prescription of student uniform by the educational institution does not violate Article 14 (Equality before law), Article 15 (Prohibition of discrimination on grounds of religion, race, caste, sex or place of birth), Article 19 (Protection of certain rights regarding freedom of speech, etc) and Article 21 (Protection of life and personal liberty) of the Constitution on the following grounds:

i) Schools are qualified public places structured for imparting instructions to students inter alia education, general discipline and decorum, etc for which school uniform is essential. A uniform dress code would play its role in bringing unity and harmony over ethnic, religious and social divisions. Hence, prescription of dress code cannot be held to be arbitrary and discriminative.

ii) The imposition of restrictions on rights and regulations is a small price which people pay for being members of a civilised community. Such regulations are aimed at balancing competing interests i.e. collective rights of community at large and individual rights of its members. Hence, in qualified public places such as schools, courts, war rooms, defence camps, etc, the freedom of individuals is curtailed to ensure discipline and decorum. They cannot be allowed to be free to choose their own attire at the respective qualified public places. Otherwise, it would offend the feel of uniformity which the dress code is designed to bring about amongst students in schools, etc, regardless of their religions and faiths.

14) Lastly, the Impugned Government Order does not prescribe any dress code by itself and only provides for prescription of ‘Student Uniform’ by the educational institutions in the State. Hence, the challenge against validity of the Impugned Government Order is rejected. The Court further held that the educational institutions while prescribing the dress code may exclude hijab as well as other forms of apparel such as bhagwa, blue shawl, other religious symbols.

Thus, based on the aforesaid observations, the High Court held that wearing of Hijab is not an essential religious practice in the Islamic faith and prescription of uniform or dress code by the Karnataka State Government is a reasonable restriction that is Constitutionally permissible and thus, the students cannot object the same. Accordingly, the Writ Petitions have been dismissed.